Kolhapur, a major city in the state of Maharashtra is steeped in popular history. It has an important place in Maratha history, primarily after 1707, following the succession dispute between the descendants of Chhatrapati Shivaji. References to Kolhapur in this period are many, and well documented. There’s more to this city than this recent history, however. 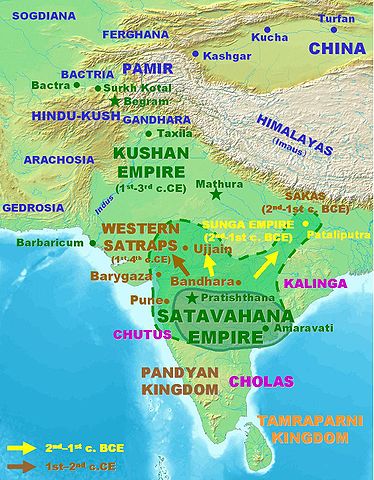 Excavations in and around Kolhapur reveal that it was first occupied during the Satavahana period (c. 200 BCE to 200 CE). The early Satavahanas ruled, what is now Andhra Pradesh and Telangana. They were the vassals of the Mauryan empire, and established themselves after the decline of the Mauryan kingdom, around 230 BCE.

Around 1st century CE, the western parts of India were ruled by Saka (Indo-Scythians) rulers, who were collectively known as the Western Satraps. The Western Satraps, occupied territories from the early Satavahanas during their reign in this region. By 63 CE, Nahapana, one of the most powerful Satraps, was ruling over Malwa, Southern Gujarat, and Northern Konkan, from Broach (Modern Bharuch, in Gujarat) to Sopara (Modern Nalla Sopara, near Mumbai)  and the Nasik and Poona districts. While I haven’t found any specific mention that Nahapana’s domains included Kolhapur, we have other sources to confirm this. Suffice it to say for now, that Kolhapur was under the rule of the Western Satraps.

Come 126 CE, and we have one of the most famous kings of the Andhra Satavahana dynasty — Vilivayakura II, also known as Gautamiputra Sri Satakarni, also known as Shalivahan. (Yes, he is the one who gave us the Shalivahan calendar, which is used in India throughout.) Vilivayakura II recovers the territories lost by the Satavahanas to the Wester Satraps. Vilivayakura II makes Kolhapur his western capital. Kolhapur is mentioned as Hippokoura by Ptolemy and Vilivayakura II is referred to as Baleokouros. Couple of decades later, Vilivayakura II’s son, Pulumayi II moved the capital to Pratishthan (Modern Paithan, in Maharashtra) on the upper waters of the Godavari River.

Safe to say, then that there is enough influence on Kolhapur, of the Yavanas (Ionians, or Asiatic Greeks), the Indo-Scythians, the Parthians (of Persia), and the Andhra Satvahanas.

In other sources, Kolhapur is mentioned as Kollaksetra, from where it derives its current name — Kolhapur, as seen on inscriptions from the Shilaharas (800 CE – 1256 CE).

The site of Brahmapuri where the excavations were made is now almost within Kolhapur city, and the artefacts are available to view from the Town Hall Museum at Kolhapur.